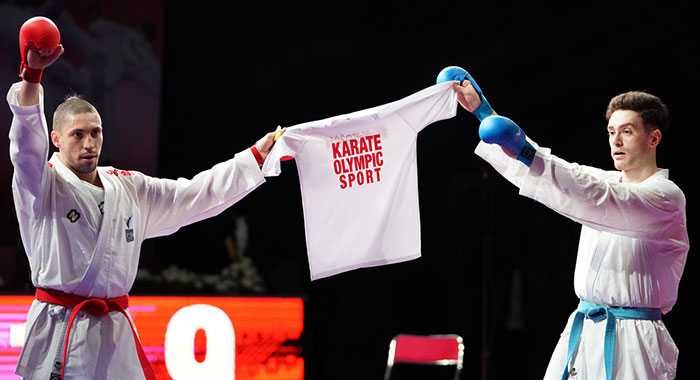 Karate stars and Ukrainian and Turkish karatekas dominated the last day of the Karate 1-Premier League tournament in Rabat (Morocco) and secured the gold medals at stake today. Ryo Kiyuna, Serap Ozcelik, Stanislav Horuna, and Anzhelika Terliuga were among the big winners of the third stop of Karate’s first-class series of international events.

Japan recovered the supremacy of the Kata competition as the representatives of the birth nation of the sport claimed the two gold medals in individual categories. Kiyou Shimizu and Ryo Kiyuna retook the titles in Female and Male Kata respectively following hard-fought victories in the double Japan-Spain duel in the finals.

Kiyou Shimizu defeated Sandra Sanchez of Spain in the title-deciding bout of Female Kata. The two-time World champion excelled in her performance of “Chibana no Kushanku” kata and got a score of 27.48 for 27.26 for the Grand Winner from Spain.

Japan completed the clean sheet in Kata with the crown by Ryo Kiyuna in the Male category. The current Grand Winner and World ranking leader performed a flawless “Ohan Dai” kata to defeat Spain’s Damian Quintero in the final. Kiyuna achieved a score of 28.2 for 26.88 for Damian Quintero.

Turkey’s Serap Ozcelik demonstrated outstanding domination of Female Kumite -55kg as she claimed her third Karate 1-Premier League crown in three events this year. The impressive Turkish competitor defeated Radwa Sayed of Egypt in the final after taking a “Yuko” and “Wazari” by “Mawashi geri” kick.

Ukraine’s Anzhelika Terliuga became one of the stars of the event with an outstanding victory in the final of Female Kumite -55kg. The former Grand Winner from Ukraine was down in the final bout against Tzu-Yun Wen of Chinese Taipei with 2-2 in the scoreboard and “Senshu” (first unopposed point) for the representative of Chinese Taipei. However, with only nine seconds left, Terliuga connected a fantastic “Ura Mawashi geri” kick that allowed her to win the bout 5-2 and the title.

The final of Male Kumite -75kg was a complete roller-coaster of a bout and one of the most thrilling matches of the day. Stanislav Horuna of Ukraine and Ali Asghar Asiabari of Iran engaged in a sensational demonstration of offensive Karate as they exchanged point after point. Former Grand Winner Horuna saw how his opponent was taking the lead in the bout, but the Ukrainian karateka always managed to put the tie back in the scoreboard. With only one second to go and 6-8 down in the scoreboard, the 30-year-old karateka from Ukraine connected an unexpected and spectacular kick to take the “Ippon” and the final 9-8 victory.

The third gold for Ukraine today was taken by Valerii Chobotar who also claimed the title in a heart-wrenching bout. In the final of Male Kumite -84kg against Ryutaro Araga of Japan, the encounter went 3-3 with only two seconds left. Then, the Ukrainian karateka managed to take a “Tsuki” to claim the “Yuko” and the tight 4-3 triumph.

The Karate 1-Premier League Rabat represented the opportunity for up-and-coming competitors to confirm their ascent to the elite of the sport. After taking medals in all the events this year, Kazakhstan’s Darkhan Assadilov confirmed his top level with his second gold this year in Karate 1-Premier League. A “Yuko” with only five seconds to finish the bout is all that Assadilov needed to beat Grand Winner Eray Samdan of Turkey 1-0 in the final of Male Kumite -60kg.

Meanwhile, in Female Kumite -68kg, Elena Quirici of Switzerland claimed her second gold this year after edging Halyna Melnyk of Ukraine. Both karatekas scored one “Yuko” each but current European Championships runner-up Quirici got the title by “Senshu” or first unopposed point.

Meltem Hocaoglu Turkey and Sajad Ganzjadeh of Iran completed the list of gold medallists in individual categories today. The Turkish karateka defeated Guadalupe Quintal of Mexico in the final of Female Kumite +68kg by “Hansoku” or disqualification by an accumulation of infractions. Sajad Ganzjadeh won his first gold this year after beating Alparslan Yamanoglu of Turkey by 2-0 in the final of Male Kumite +84kg.