Volkanovski for Jose Aldo: I just had him puzzled 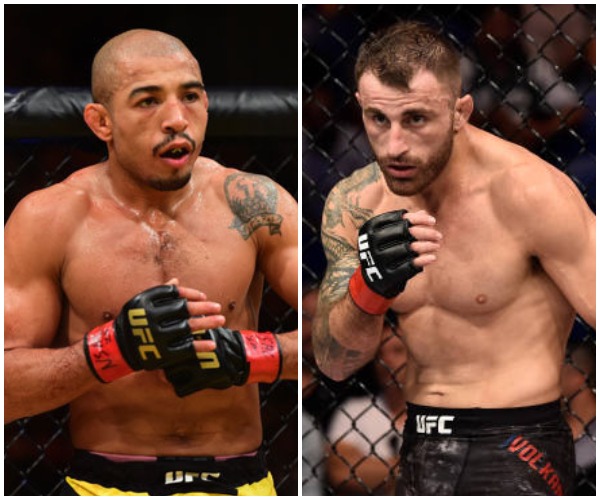 The still unbeaten in UFC fighter – Alexander Volkanovski, didn’t fail his huge test against Jose Aldo. Arguably the greatest featherweight of all time.

The Australian improved his stats to 7-0 and is looking forward. So how did Volkanovski do it?

“I had him puzzled pretty much that whole fight”, Volkanovski told host Luke Thomas on “The MMA Hour” on Monday. “Going in we had a game plan, I stuck to it really well and that’s why you seen him sort of struggling with it, so that was just again on my part – I’ve done everything I was meant to. I smashed the game plan, I thought that he might have took a few more risks when things weren’t going to good for him. I thought he would have got desperate and that’s where I would have caught him.”

“I knew a lot of people were saying going into that fight, ‘watch the leg kicks,’ ‘watch his counter,’ ‘he’s so explosive,’ and stuff like that. I knew that, but it’s easy to just say you’re gonna hit someone if I’m standing there, fair enough. But when I had him so worried about what I was doing, I just had him puzzled and you could see that. He was always adjusting, always trying to set himself up, and before he knew it he couldn’t pull the trigger.”

Alexander Volkanovski explains how he beat Jose Aldo: ‘I just had him puzzled’ pic.twitter.com/novnHc30Qq

The way Volkanovski sees it, his well-rounded game was tailor-made to defuse Aldo.

“He’s a counter-striker, he loves to counter, he’s always based very heavily. He loves the leg kicks. Look, if you stand still in front of him, he’s going to fire them big leg kicks. I’m sure that was his game plan with me, to fire off the leg kicks, but I always had him adjusting so that’s why you’ve seen me with a lot of movements, a lot of fakes, a lot of feints”, Volkanovski explained. “I just always had him guessing”.

“I actually was trying to draw him into pulling the trigger, I think he noticed that so that’s why he wasn’t pulling the trigger at all. But at the same time, even with the clinch work and stuff like that, if I shot in and he stuffed the takedown, I was going to come right back in. That was just another thing for him to worry about. It was just to have a puzzle in front of him, have him so worried about things that I’m doing. He’s very, very over-reactive, he reacts heavily to everything.”

“If I throw a fake and then fire, which a lot of people do, obviously he’s very good at adjusting and countering and that’s why he lands a lot of these knees and he knows when to fire”, Volkanovski continued. “If you throw a jab and follow up with something, you do that two or three times, he’s going to capitalize on it. Just changing the timing with things and momentum changes, there’s so many different things getting thrown at him and that’s what kept him puzzled.”

As simple as that, Volkanovski stuck to his game plan and in doing so became just the fourth fighter who can say that they got the better of Aldo.

Volkanovski’s win over Aldo put a damper on the two-time champion’s own plans to regain his belt, but there were no hard feelings when they shared words after the fight.

“I was just saying to him it was honor to fight him, much respect, it was such a great honor,” Volkanovski said. “And he was like, ‘No, no, honor to fight you,’ because he’s always been a humble, really respectful guy and that’s all he was saying back to me, that it was an honor to be in the cage with me. Just being polite.”