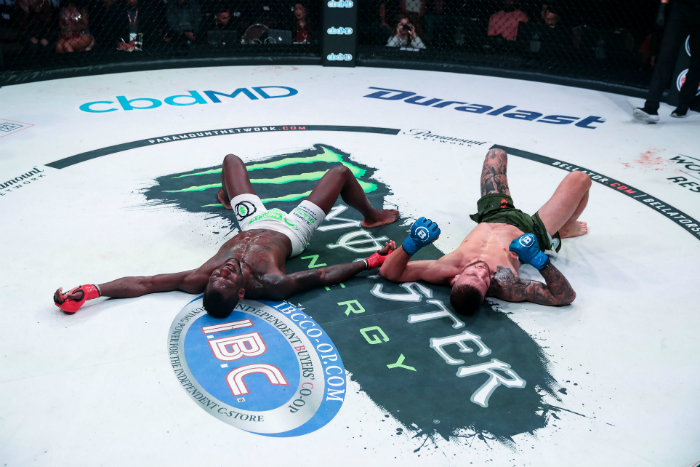 On Friday night at the WinStar World Casino in Thackerville, Okla., Bellator returned with the first event of its weekend doubleheader, Bellator 239, and it was a bad night for former standout collegiate wrestlers. Early in the night, Tyrell Fortune was knocked unconscious by Tim Johnson, and in the main event, Yaroslav Amosov kept his gaudy undefeated streak intact, winning a clear unanimous decision over three-time Division I national wrestling champion Ed Ruth.

In the main event, Ruth had a hard time getting anything going against the talented Ukrainian fighter as Amosov was able to stuff Ruth’s takedowns, sometimes in truly impressive fashion. Conversely, when he wasn’t shucking off takedowns, Amosov was able to land decent punches and even scored takedowns of his own on the decorated collegiate wrestler. The fight ended up turning largely into a volume kickboxing match, with Amosov’s punches outscoring Ruth’s range kicking game. In the end, Yaroslav Amosov walked away with the win, moving to 23-0. After the bout, Amosov called for a shot at welterweight titleholder Douglas Lima.

In the co-main event, Myles Jury finally got his first win inside the Bellator cage, taking a hard-fought decision over one of Bellator’s most well-known faces, Brandon Girtz. Girtz came out in the first round throwing heavy leather while Jury mostly countered, landing a few good knees as Girtz stepped in. In the second round, Girtz changed his approach, pushing Jury against the fence and then scoring a takedown where he spent much of the round controlling from Fury’s guard before the referee finally stood them up. Jury eventually snuck to the back near the end of the round but Girtz had done enough to knot the score heading into the third round. In the third though, Jury made the necessary adjustments, keeping the fight on the feet and picking his shots well before scoring his own takedown late in the round. In the end, Fury took the unanimous decision win with scores of 29-28 on all three cards.

In the surprise of the evening, veteran wrestler Tim Johnson shocked the Bellator universe by cold-cocking elite heavyweight prospect Tyrell Fortune in one of the biggest upsets of the year thus far. Fortune entered the bout as a -800 favorite and was expected to keep his rise up the ranks moving right along but just 2 minutes and 35 seconds into the first round, Johnson pushed Fortune back up against the cage and unloaded a right hook perfectly on the button of Fortune that turned the lights out immediately and handed the former national champion wrestler his first loss in MMA.

In the main card opener, Valentin Moldavsky got things rolling with a dominant, if underwhelming performance against Javy Ayala. Moldavsky immediately came out working a takedown and top control game that Ayala had no answer for. The scrappy heavyweight contender never gave up, but even when Ayala was able to get back to his feet Moldavsky just secured another takedown, seemingly at will. The Russian prospect rinsed and repeated this methodology for all three rounds, mixing in some strikes and a few submission attempts for good measure but never really coming close to finishing Ayala. In the end, Moldavsky won a unanimous decision with scores of 30-25, 30-24, and 30-24, moving him ever closer to a shot at the heavyweight title.

Denise Kielholtz (5-2) defeated Kristina Williams (3-3) via submission (rear-naked choke) at 2:15 of round one