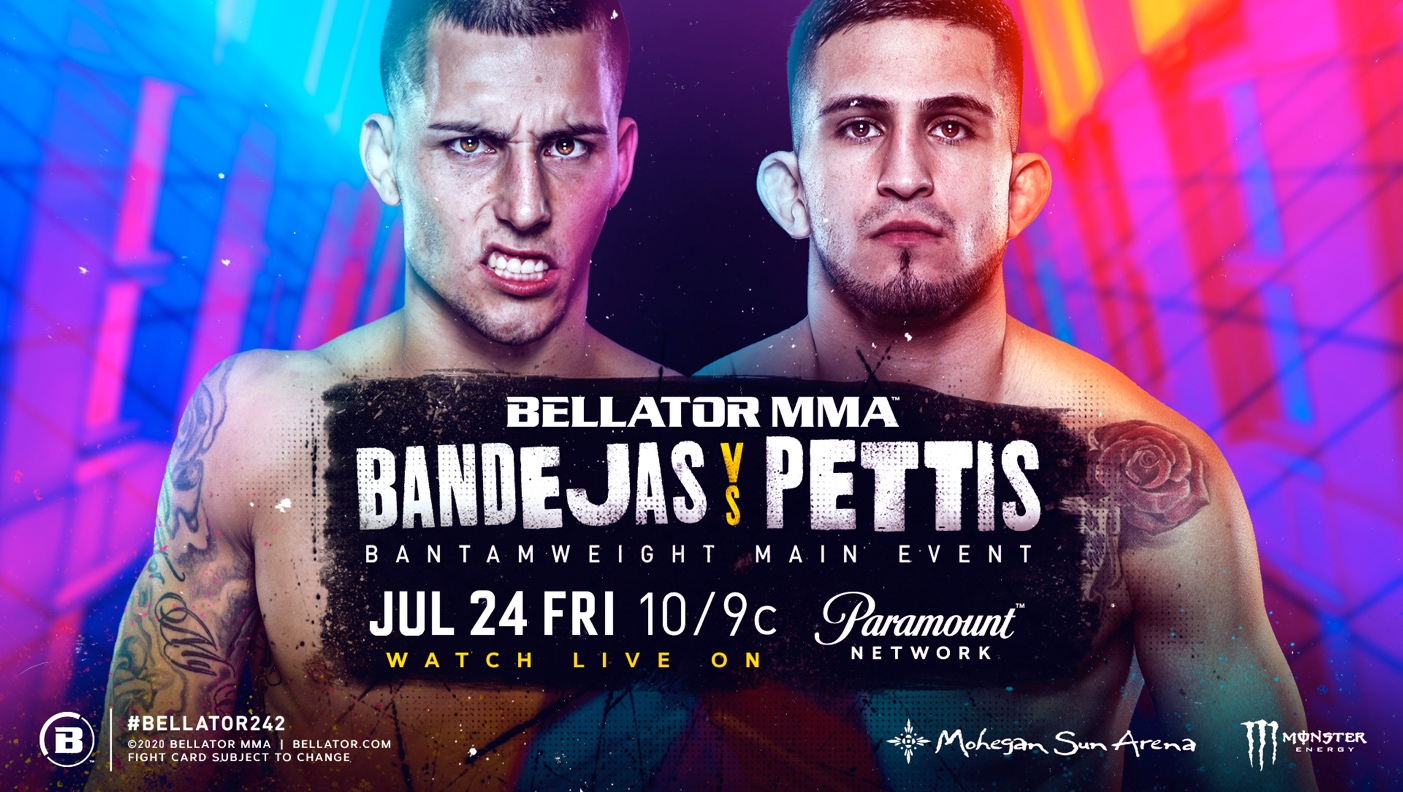 Bellator MMA returns to action for the first time since the global coronavirus pandemic began earlier this year, bringing the sports world to a standstill. Next Friday, July 24 at Mohegan Sun Arena in Uncasville, Conn., Bellator will deliver an exciting card headlined by two of the bantamweight division’s top contenders, as Ricky Bandejas (13-3) faces Sergio Pettis (19-5) in a three-round clash on Paramount Network at 10 p.m. ET.

“On July 24, Bellator is back,” said Bellator MMA President Scott Coker. “I am thrilled to announce our return event this month at Mohegan Sun, which has always been an incredible venue partner for us. The team has worked tirelessly to make this show happen and I know the fighters are ready to compete. We put together an exciting card with great matchups, featuring some of our best rising prospects. We look forward to our fans joining us on Paramount Network for what will surely be a memorable night of action inside the Bellator cage.”

“We’re thrilled to welcome back major sports with Bellator MMA for what will be an amazing fight event airing on Paramount Network,” said Tom Cantone, President of Mohegan Gaming & Entertainment (MGE). “Mohegan Sun has done an incredible job with a comprehensive and extensive safety plan for all guests, team members and partners, and we know our friends at Bellator will really enjoy their stay and have another great experience at our world class arena.”

Hailing from Brick, N.J., Ricky Bandejas will return to the cage for the second time in 2020 and sixth overall since signing with Bellator MMA in 2018. Coming off an impressive KO victory over Frans Mlambo at Bellator 240, Bandejas is looking to extend his current winning streak to three and is no stranger to fighting elite competition. With nine of his 13 career wins coming by way of knockout or submission, including four in the first round of action, the heavy-handed 28-year-old will be looking to notch another highlight reel finish on July 24 and earn his shot at the 135-pound world title.

A longtime UFC-veteran, Sergio Pettis made his Bellator debut in January when he submitted Alfred Khashakyan via guillotine a mere three minutes into their bantamweight matchup at The Forum in Los Angeles. Training out of the famed Roufusport gym in Milwaukee alongside his brother, Anthony, and fellow Bellator athlete Emmanuel Sanchez, Pettis won nine of his 14 UFC appearances with victories over Joseph Benavidez, Brandon Moreno and John Moraga. Now, Pettis has his sights set on a world title fight, which is all but guaranteed with a win at Bellator 242.

The main card on Paramount Network also sees a co-main event pitting Jason Jackson (11-4) against Jordan Mein (31-12), who will be making his Bellator debut, in a welterweight contest, a 145-pound bout between the always-exciting Tywan Claxton (6-1) and undefeated Jay Jay Wilson (5-0) of New Zealand, while Aaron Pico (5-3) returns to featherweight against Chris Hatley, Jr. (8-2), who upset Bellator mainstay Gaston Bolanos earlier this year.

The preliminary portion of Bellator 242 includes a bantamweight affair featuring Roufusport’s Raufeon Stots (13-1) taking on Cass Bell (5-0) of Humboldt County, Calif., a heavyweight slugfest between Steve Mowry (7-0) and Rudy Schaffroth (6-1, 1 NC) and Logan Storley (11-0) putting his unblemished record on the line against Mark Lemminger (10-1) in a 170-pound matchup.