Bob Arum on Pacquiao: He will beat Floyd Mayweather 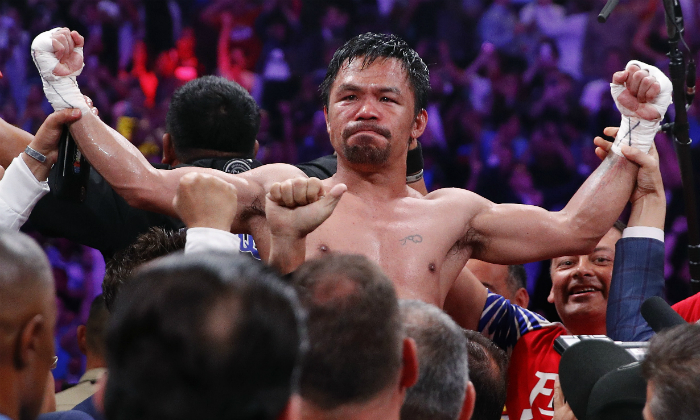 Top Rank promoter Bob Arum says Manny Pacquiao will beat Floyd Mayweather if that rematch takes place now. Arum thinks Pacquiao (62-7-2, 39 KOs) is now at the point where he’s able to beat “Money” Mayweather. That’s a fight that Arum would like to see.

“I heard whether it’s 450, 400, be it 350, but remember, Manny Pacquiao gets paid as a guy that does one million buys,” said Top Rank Boxing promoter Bob Arum to Fighthub. “So if you do a lot less than half [500,000 buys], I mean, how do you pay his purse? That was the problem we had when we decided we couldn’t promote him anymore. I think that’s great. He got the win [against Keith Thurman]. He went out on a big note. I would recommend that this is the time for him to hang it up. But listen, he makes his own choices.”

“He’s a smart guy. I mean, I wouldn’t be that concerned if he didn’t have his whole career in front of him, and slur your words. If that fight happens, then it’s probably worth it to do, because that would be a big, big, big fight,” said Arum about a Pacquiao vs Mayweather rematch. “Manny Pacquiao would win now.”

To the fans I fight for, the media who cover me, the friends and family who support me, and to @KeithFThurmanJr, who accepted my challenge, Saturday night was an honor and privilege. I would also like to thank @premierboxing, @FOXSports, & @MGMGrand for a great event. God Bless. pic.twitter.com/yM91F5mnE4

He says Pacquiao should retire if he can’t get the Mayweather, because none of the other welterweights in the division makes any sense for him to fight.

“That would be crazy. He shouldn’t do that”, said Arum about Pacquiao fighting Errol Spence or Shawn Porter. “If it’s a Mayweather fight, yeah, okay. But if it’s not a Mayweather fight, then he should hang it up. No, those fights don’t make any sense. If Pacquiao wanted the fight , but Pacquiao has already turned the fight down a few times,” said Arum about Terence Crawford. “It’s up to him. If he gets Mayweather, fine. That’s a big, big fight, and he can get revenge on Mayweather or try to. But if it’s anyone else, I think he should think very, very, very seriously about hanging it up. Manny Pacquiao has been a great fighter of our time, and God forbid that he gets hurt, particularly when he’s got such a brilliant career ahead of him,” said Arum.