Chisora: Whyte is being punished for not fighting Joshua in 2019 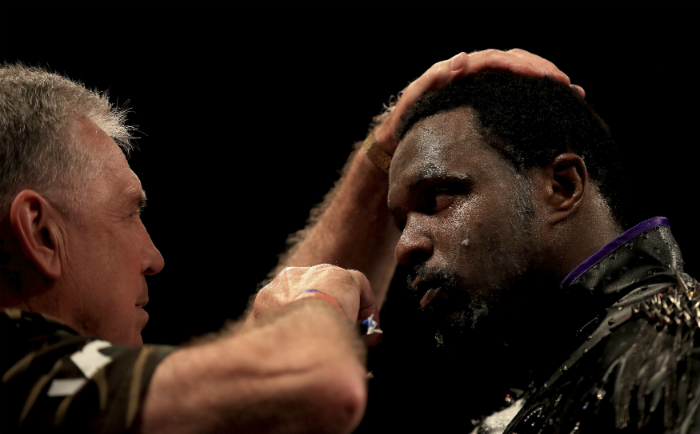 Britain’s heavyweight Dereck Chisora believes his fellow countryman Dillian Whyte is being punished for not fighting Anthony Joshua in 2019.

According to “WAR”, there was an agreement that whoever wins the second fight between him and Whyte back in December 2018 will face the unified world champion, Anthony Joshua.

When Whyte KO’d Chisora in the 11th round, Joshua was watching from the commentary table and after the fight, he got in a little scuffle with Whyte.

Matchroom Boxing and Eddie Hearn even booked Wembley Stadium for April 2019 for the potential fight between Joshua and Whyte, but then Whyte decided he doesn’t like the deal that was offered to him and Joshua went on to make his US debut.

“It’s going to be a good fight because Povetkin wants to, and Dillian wants it,” said Chisora to IFL TV. “You have Dillian, and you had me, and the whole idea was the winner of Dillian, and I fights AJ in Wembley, but then when Dillian won, he didn’t want the deal.

“He decided to fight somebody else. They had to scrap the whole production. They put so much money into the production in hiring Wembley and getting everything done. Then it all got scrapped.

“Who is he going to fight? They found a Mexican. The Mexican came, and everything is all messed up. This all has to do with Dillian. Let’s remember that here. And then AJ lost. Guess who the blame is on now? The blame is on Dillian.

“If Dillian had taken that fight, the fight would have happened in London. So Sky’s upset, DAZN is upset, AJ is upset, and Eddie Hearn is upset. They’re all upset with Dillian. The WBC, IBF, they’re all upset with this guy because he didn’t play ball by fighting AJ in Wembley. ‘We’re going to sort that guy out.

“Oh yeah, done. Guess what? The rematch with Ruiz happened in Saudi,” said Chisora. “But now nobody is upset with Dillian is because there’s so much money in there now,” said Dereck.