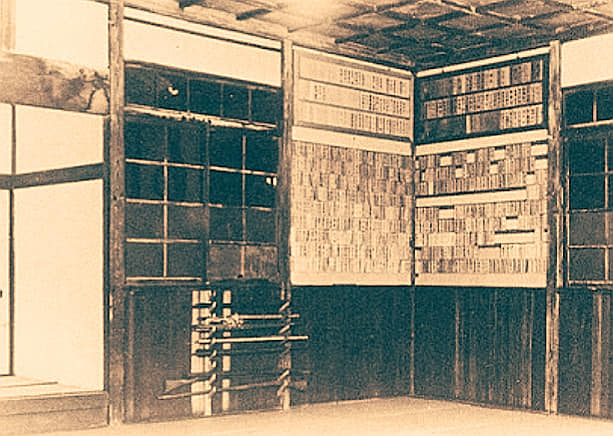 The dojo was the size of 60 tatami mats (about 100 sq m) and the training area was made up of about 40 Ryūkyū tatami mats, injured in several places; in the remaining part of the dojo there was a glossy dark wood floor.

The ceiling was formed by large crossed wooden beams and, to the side of the door through which the dojo was accessed from the Ueshiba house, there was an area raised from the floor and recessed into the wall (the shinden where the guests usually used to sit to assist training), whose central wall was covered with a large reproduction of a dragon’s head. To the right of this area, on the appropriate shelves, bokken were lined up together with jō and mokuju (wooden rifles). On the upper part of the wall hung wooden tablets with the names of the students and in the center of the wall that was on entering on the left, there was a large clock above another entrance through which the students used to access the dojo.

After a few minutes, a rather tall and robust boy who wore a blue kendō and hakama keikogi and a gentleman with a black belt, who started training, entered. The boy, 5th dan of kendō, was Mr. Kikuchi Tokyo (who then moved to Kamaishi), the other person was Mr. Kikuchi Ban who had signed up for the dojo the day before.

Seeing them practicing katatedori tenkan no kokyu the master Tada thought that it was something completely different from the other martial arts he knew. At this point he realized that, in addition to using extremely rational movements to assimilate the attacker’s force in the flow of his energy, the basic idea was to implement rotations with the body so as to become one with the attacker. He then returned to Tokyo after about four days. At that time, training was given daily by the second Doshu, Ueshiba Kisshomaru, in the morning and evening, from 6.30 onwards, for an hour. The pupils were still few in number, but all of them engaged with great zeal in practice, training constantly within the time limits allowed. Master Tada trained until 10 o’clock that morning. After training, when he reached the main road in Nukebenten, he saw two people, one dressed in a kimono and the other in a student uniform, who probably had just gotten off the tram. recently restarted. Mr. Kikuchi Tokyo said to him: ‘‘Sensei is back, come Tada!’’ And started running to meet the two people.

After saying goodbye to Master Ueshiba, he introduced him: ”Master, this is Mr. Tada, he just joined the dojo”. When he looked up after completing the greeting, he noticed that Master Ueshiba was staring at him intensely. Taking off his hat he said to him: ”My name is Ueshiba” and, to his amazement, he courteously bowed to him, who was merely a student in uniform. Being at that moment finally in front of the master Ueshiba, of whom he had long known the great fame from the stories he had heard in the past, was taken by an uncontrollable emotion: it was as if before his eyes they had suddenly come to realize all the desires and hopes that for a long time had nurtured in the depths of the heart.