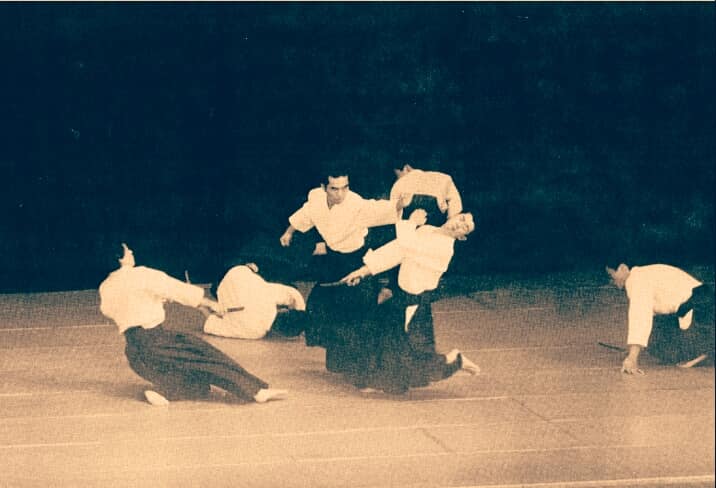 In 1961, at the age of 38, Sunadomari received the rank of 9th dan. Sunadomari dedicated himself to the teaching of aikido in Kyushu while based in Kumamoto.

Sunadomari comes from a family of devout believers in Omoto, the religion on which Ueshiba based the spiritual underpinnings of aikido, and the Sunadomari family maintained a close relationship with the founder until his death. Kanemoto Sunadomari (elder brother of Kanshu) studied under the founder in the early 1930s and published the first biography of the Founder in 1969 entitled Aikido Kaiso Morihei Ueshiba. A newer version of this book was later published under the title Bu no Shinjin. Fukiko Mitsue Sunadomari (elder sister of Kanshu) was a close personal confidante of the founder until his death and was also a high ranking practitioner of aikido.

After Ueshiba’s death in 1969, Sunadomari founded his own independent style in Kumamoto City and began his further study of the spirit of aikido. In 1999, he renamed his style Aiki Manseido symbolizing his conviction to help spread world peace by transmitting the spirit of the founder across the world through physical technique. The “do” in Manseido is the same as in Aikido, referring to “the way”, rather than the “kan” in Manseikan that can be translated as mansion or castle. Manseido translates as “the way of giving life to all things” or “the way for all people.” On January 11, 2008, Sunadomari chose to return to using the name Manseikan Aikido to pay homage to the Founder and to re-emphasize his organization’s dedication to the study and manifestation of the Founder’s philosophy.