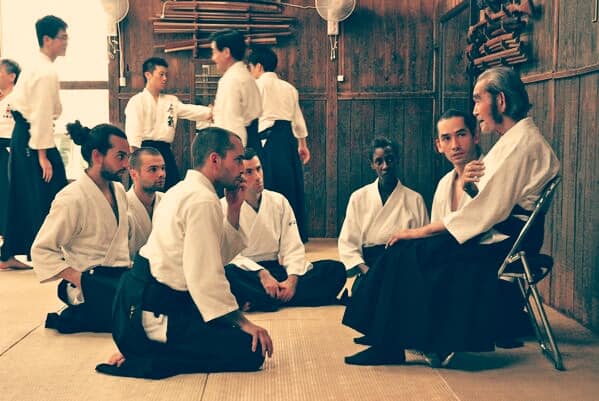 Practitioners of his style recite the Spirit of Aikido before beginning each practice : “Aiki is Love… it is through the spirit of protective love for all things that we perfect our life’s mission… “. Practice in Manseikan Aikido consists of a set of flowing warm-up exercises, a number of paired movements that train both body movement (taisabaki) and breath-power, practice of basic technique (kihon waza), as well as paired warm-down exercises (sei no undo).

Training is further supplemented with practice using the wooden sword (bokken) and staff. Sunadomari is known for his emphasis on kokyu ryoku (breath power) and his extremely soft and powerful technique.

He is widely acclaimed for his dynamic performance in the First Friendship Demonstration which was held in Tokyo in 1985 and became one of the most famous modern aikido demonstrations captured on film. He has written several books, most of which have never been translated from their original Japanese. In 2004, his book Enlightenment through Aikido (Aikido de Satoru) became the first to be released in English translation.
Kanshu Sunadomari died in November 2010.