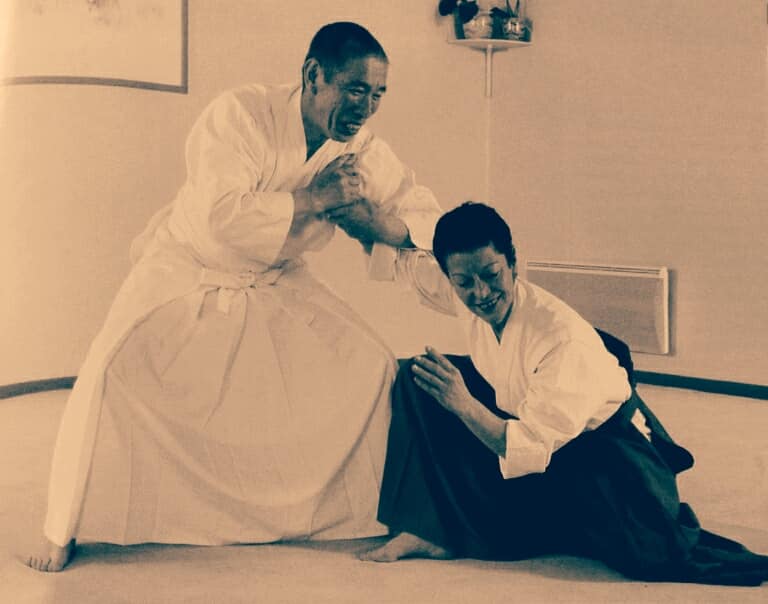 In 1979, after a discussion with Kisshomaru Ueshiba, the son of the founder of Aikido, Masamichi Noro created Kinomichi in order to further extend his quest. There followed a new succession of Parisian dojos dedicated to the study of Kinomichi: rue Logelbach, boulevard de Strasbourg, boulevard des Batignolles. After an inevitable period of adjustments and intense research, the links between Kinomichi and Aikido developed and deepened.

1995, at the time of the 20th anniversary of Aikido in Germany and at the invitation of his friend Katsuaki Asai, 8th dan Aïkikaï and pioneer of Aikido in Germany, he presented Kinomichi before a gathering of the greatest masters of Aikido, including the Doshu. From 1996, he made frequent visits to the Aikikai Foundation in Tokyo and, of course, to Kishomaru Ueshiba, the son of Aikido’s founder. In 2001, he obtained recognition from the ministry of youth and sports (Ministère de la Jeunesse et des Sports) of Kinomichi as an official sporting discipline. In 2004, he participated in the events celebrating the 20th anniversary of the Federation francaise d’aikido, aikibudo et affinitaires, FFAAA, which welcomed the Moriteru Ueshiba, representative of the Centre Mondial de l’Aikido in Tokyo. Masamichi Noro, Nobuyoshi Tamura and Christian Tissier were notably present to receive the delegation from the Hombu Dojo of Tokyo. They were among 3000 practitioners from all of France as well as numerous European countries. April 8, 2005, he was invited with Master Christian Tissier to participate in a workshop organized by the association Hakki for the benefit of the 220,000 victims of the tsunami of December 26, 2004. In 2007, at the initiative of the FFAAA, he welcomed into his Parisian dojo Japanese masters, including Isoyama. March 15, 2013, Noro Masamichi died.