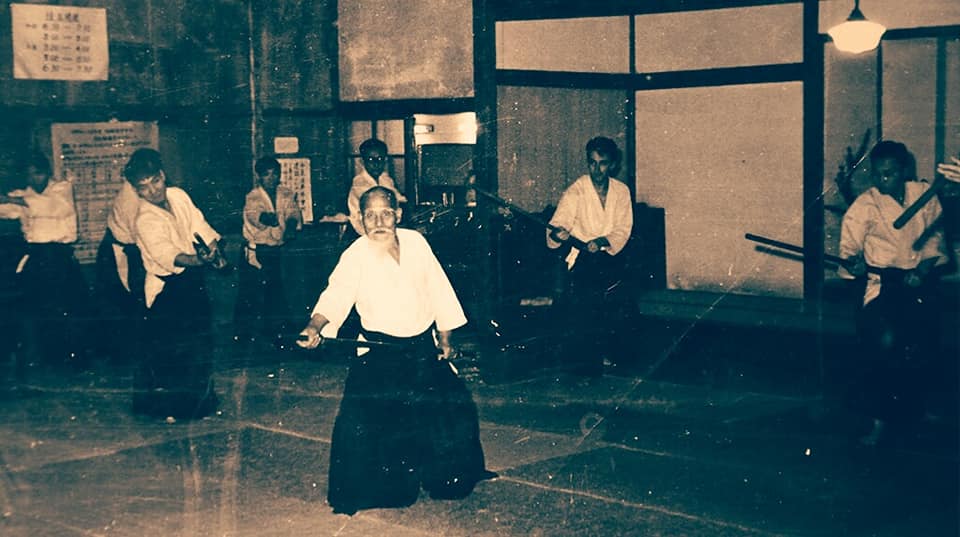 Each session started and ended with breathing techniques. The Founder often illustrated his explanations with different weapons, especially the sword and the wooden bayonet. Each body technique was explained according to the movements of the sword and penetrating blows. The Founder was then close to fifty, perhaps to the best of his physical strength.

Shirata Sensei was amazed at his power:

“Although he had a small hand, about half of mine, his grasp squeezed; it was impossible to move when he blocked your arm and even when he patted you with a finger he left you with a bruise that lasted days. You never could understand how he managed to project you; suddenly you found yourself fluttering in the air, almost as if you were floating on a cloud. On the other hand, when it really hit you, it was like receiving an electric shock, the pain was very intense.

The Founder was particularly terrifying when he wielded the sword; it literally changed. He looked like a fierce warrior demon. ”
Even in such a select group of students, Shirata Sensei became known as the “Wonder of the Kobukan”, especially after his one-year stay in Okayama prefecture, where – in 1934 – Shirata Sensei was sent to create a branch of the “Society. the spread of budo “. In the capital, the presence of the Founder discouraged all challengers, except for some reckless daredevil, but in the province many were feeling tempted to test the ability of his young students. Judo practitioners, kendo, sumo wrestlers, boxers, and simple wranglers showed up to challenge the new instructor. Shirata Sensei first informed them that
“Aikido is not fighting, while shiai (contention) really means sbiai (deadly struggle)”.

However, he accepted any kind of struggle; there were several broken arms and no one could boast of having beaten the “non warrior”. “Who can resist the force of non-resistance?” he joked as he knocked down one of the many bullies. Unfortunately it is not possible to report famous episodes in their details.

Shirata Sensei said: “These are things that happen , I was quite strong then”. However, he once claimed that shiho-nage, all irimi, and ikkyo and nikyo were the most effective techniques; and that in the event of real trouble, one should not sit still and wait for an attack, as is the case in gym practice. Especially against someone armed, taking a static attitude means being already beaten. It is true that some of the attackers were injured, but this was due to the unnatural resistance they opposed to non-resistance.