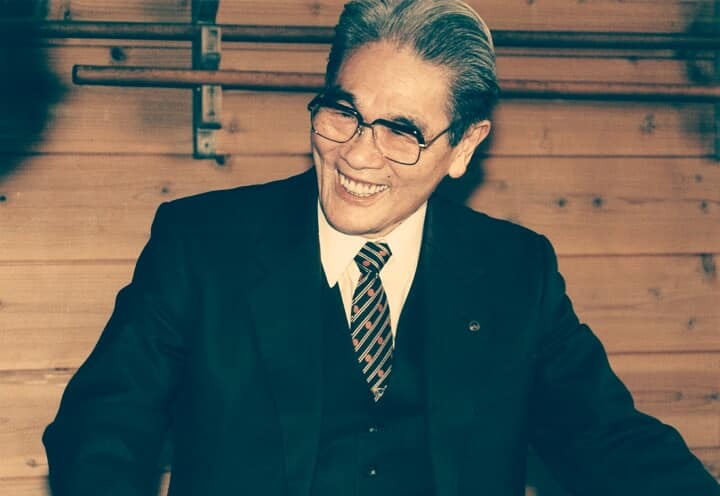 In 1980 Nishio retired from his government job at the mint and was free to devote himself fully to his training and teaching. He began traveling abroad to the U.S., Scandinavia and Europe and continued for the next 20 years. He was influential in Denmark, Sweden, Czech Republic, Sweden, Germany and France. In California seminars with Nishio were hosted by Robert and Chikako Bryner and played a huge role in the development of Nishio’s Aikido in the U.S.

Nishio Shihan constantly developed and refined his technique with the two goals of martial effectiveness along with adherence to Aikido’s principles of acceptance and non-conflict.

His decades of work in iaido and jodo developed into a thoroughly integrated approach to combined empty hand, sword and jo. Nishio Sensei developed a new form of iaido called Aikido Toho Iai which illuminates the deep relationship between the katana (Japanese sword) and techniques in Aikido. Aiki Toho Iai continues to evolve in the hands of Nishio’s successor, Koji Yoshida. Nishio’s methods are thoroughly rooted in the traditional use of these weapons and are entirely different from the methods popularized by the late Morihiro Saito of Iwama. For example, Nishio’s sword work is otonashi or silent, meaning the contact between blades minimal and movements are done in the gaps of the opponents attack. The ken (sword) and jo are central to Nishio Aikido. Nishio said that, “O Sensei said that ‘Aikido is the expression of the principles of the sword through the body.’ Therefore, understanding Aikido without first understanding the sword is quite strange. It seems to me that those who claim there are no weapons techniques in Aikido have not understood the founder’s words.”

Nishio Sensei was not only diligent about the technical aspects of Aikido, he was faithful to Aikido’s philosophy. He did not merely attempt to imitate the founder’s art. He took O Sensei’s teaching to heart and combined it with his broad knowledge and skill resulting in a highly ethical as well as effective form of budo. Shoji Nishio, Shihan passed away on March 15, 2005 at the age of 77. On his final trip to the U.S. in 2000, he left his legacy in the U.S. to his long time student of 34 years, Koji Yoshida, Shihan.

The world is changing more rapidly than ever. There is a saying now, “If you’re doing the same thing today you were doing six months ago, you’re doing the wrong thing.” This is true in aikido. It is not necessary to abandon everything from the past, however, our understanding today should not cease to grow. We must not abandon our core principles, rather, we should continue to grow and adapt and keep pace with the times. In this way Aikido can avoid drifting into irrelevance and instead continue to grow and evolve into the future.