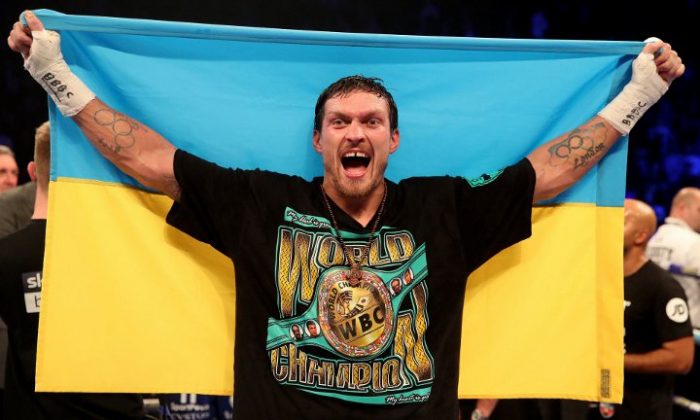 Oleksandr Usyk, who unified all four major titles at cruiserweight between 2016 and 2018, is looking to do the same thing now that he’s in the heavyweight division.

Usyk (17-0, 13 KO) is currently the WBO’s mandatory challenger, which puts him in line for a shot at Anthony Joshua, who has three of the titles (WBA, IBF, and WBO) already. And he tells Sky Sports he will then want to fight Tyson Fury or Deontay Wilder or whomever holds the WBC title.

The division — well, the sport, really — isn’t set up to make this easy. The actual accomplishment shouldn’t and never could be easy, of course, but just politically it’s a mess to even get all four titles in the same building, let alone up for grabs in the same fight. Everyone has mandatory defenses to make, and depending on the belt and the situation and the flexibility of the mandatory challenger, sometimes those defenses are actually enforced, and if they’re not made, then the title is stripped.

Usyk, 33, is currently slated to face Derek Chisora on May 23 in London. That date, it has to be said, is in doubt at the moment due to the coronavirus pandemic, but even if it’s pushed back that’s the likely next fight. And while Chisora (32-9, 23 KO) is no superstar, he’s a big step up at heavyweight for Usyk, who has only fought once in the division, a relatively easy if not exactly sparkling win over long busted ex-prospect Chazz Witherspoon last October in Chicago.

If Usyk does win that fight, then there’s Joshua-Pulev on June 20, which itself is in question, and Fury-Wilder III is expected on July 18, if possible. It’s expected Joshua and Fury win those fights, but certainly not guaranteed.

Usyk, for his part, is going to enforce his mandatory shot at the WBO belt if he beats Chisora, and he’s hoping for the championship journey to begin there. As good as he is, the odds are, frankly, probably against him going undisputed in a second division. Even if you get it all done politically, he’s quite small for a modern heavyweight, and Joshua and Fury (and Wilder, for that matter) would have significant physical advantages.

But the fact that Usyk legitimately dreams this big should be appreciated, too. He was a great amateur, and he didn’t come into the pro ranks to build a soft record. He fought for his first world title in his 10th pro fight, went undisputed at cruiserweight in his 15th pro fight, and has gone up to heavyweight looking to move quickly in securing a major fight there, too. We could do with more Usyks in just about every way.