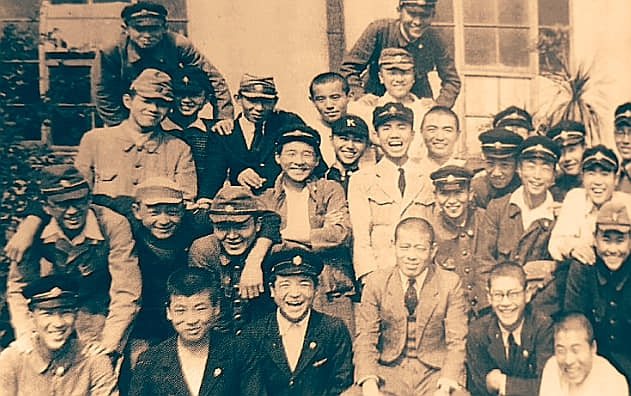 Master Ueshiba came to more or less the height of his shoulders. He had a face with marked features, with pronounced cheekbones and nose. The big, clear-eyed eyes were slightly out of the ordinary color. The long white beard, which covered his chin, reached his chest. They accompanied the teacher and Mr. Kamizono, from the Waseda Faculty of Science, who was with him, to the intersection with the road leading to the dōjō and greeted them there.

The following morning, Morihei Ueshiba’s training began with a devoted prayer to the gods. No one among the master’s pupils will ever be able to erase the memory of the sound of his voice that echoed throughout the dōjō when he recited the ritual shinto prayers. Looking at the figure of the master in those moments it could be seen in practice that his qualities considered “supernatural” were only the fruit of his practices devoted to the divinities. Folding the long hem of the sleeves of the keikogi, the master went towards the center of the tatami and waved a hand to one of the students sitting in a row, who, as attracted by a magnet, got up and came forward. He didn’t even have time to grab his wrist with both hands, which was immediately thrown into the air. The master continued to project several people in succession and at a certain point he also extended his arm in the direction of the master Tada. He stepped forward and, as soon as he grasped his wrist, as he had seen others do, with all the strength he had, he immediately found himself rolling on the tatami. All the while Master Ueshiba did not say a single word. This was the way he always started training. What most struck the master Tada in the early days that he attended the dōjō, was that the older students, despite the fact that Ueshiba remained always silent, always understood which, among the many existing techniques, he intended to demonstrate from time to time. Over time, however, he realized that who was unable to understand the type of technique that the teacher was preparing to demonstrate, was not accepted as a student. Ō sensei’s training created a very special atmosphere: it was as if the whole dōjō began to breathe in harmony with his breath.

The first time Master Tada attended a lecture he thought: “Master Ueshiba is a truly advanced teacher”. According to the rumors circulating then among his Waseda colleagues, the master Ueshiba was considered as a martial arts expert who used extremely effective techniques of koryu-jujitsu, martial arts of the past completely different from those of the time, and possessed at the same time of the “mysterious” abilities. It was, they said, as if an illustrious person in Japanese history had returned to live in our era. However, when Master Tada personally met Master Ueshiba, he warned on the contrary that he was a much more rational person than all the other budō and sports experts he had known until then, and, in some respects, extremely modern . He was very fascinated by the complexity and strength emanating from the stable rhythm of the master’s movements, but what surprised him more than anything else was that, precisely through these movements, capable of defeating an opponent in a single instant if really used for this purpose , a particularly warm atmosphere was created which psychologically involved all the people present in the dōjō.

It was on the basis of his personal experience that he came to the following conclusion: if all men tried to progress more and more, perhaps one day it would be possible to approach the model of such a great master. Since then many years have passed, aikido has spread all over the world and becomes more and more popular year by year. Thanks to his teaching experiences in Europe Tada sensei, looking at Japan from the outside, had the opportunity to understand even more deeply the teachings of the master Ueshiba Morihei, who showed everyone the way of aikido, a practical expression of culture traditional Japanese.