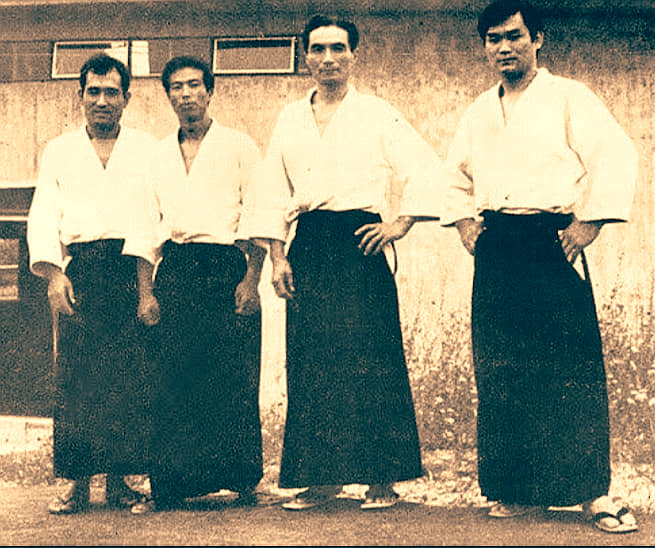 Not long after the SPE refused to let a promising student, Mr Butler, attend Chiba Sensei’s classes on account of misbehavior. Chiba Sensei asked them to reconsider and they had several meetings to discuss the issue, but they maintained their stance and refused to justify their position further than saying the student (who was in his 40s) was a ‘bad man’. Chiba Sensei told them he would bring Mr Butler to the classes as his personal teaching assistant and stated that since the classes were open to the public and funded by the taxpayer they were obliged to keep the door open to everyone without personal discrimination. As a response he was informed that he had been fired from teaching classes sponsored by the SPE, and a few days later that he must vacate the house that the SPE had arranged.

The move was a blessing in disguise since Chiba Sensei and his wife likely were quite inconvenient for their hosts, and the room they had been generously offered was not suitable. It was cold and damp, and the only way to heat it was to constantly burn coal in the fireplace, the back-draft from which filled the room with smoke. The combination of these effects caused Chiba Sensei to develop a serious lung infection which exacerbated his asthma. Furthermore, in order to treat his illness he needed to soak in a tub of hot water to warm the body, and to ease his breathing with steam. Unfortunately the hot water reserve was limited so Mrs Chiba had to collect hot water from a pan on the stove in the kitchen. Mid-December 1966, a few days before Christmas, Chiba Sensei visited the patron of YMCA hostel to see if there might be a room available for him and his wife. The patron said yes and gave him special permission to have Mrs Chiba with him, which was against their male only policy. When they left their house Chiba Sensei thanked the couple for their generosity over the last three months and presented them with a camera he had bought in Japan as a thank you. The room at the YMCA was much better, having central heating and unlimited hot water. Meals were served every day morning and evening, except Sunday and holidays. Chiba Sensei’s asthma soon disappeared. The other residents were college students from Asia, Africa, and the Middle East and Chiba Sensei spent much time with them to improve his English and was inspired by their hopes to participate in the future development of their various countries. On 30 December 1966 Chiba Sensei taught his last class of the year at the Monkwearmouth College, the bus ride was roughly 20 minutes long but he decided to walk so he could buy some bread and a Guinness for him and his wife’s first New Year’s Eve in England.

On the 14 December 1967 Chiba Sensei left Newcastle Station for London . Three notable individuals had appeared to see him off: Mr Logan’s secretary, Mr Myers of Sunderland, who had acted as his personal assistant during his stay, and his student Mr P Butler. The move represented a certain freedom for Chiba Sensei, since it was an escape from the tangled political situation of Aikido in Britain and the power struggle. As preparation Chiba Sensei had discarded his belongings, save his weapons, a few books, and a heavy sheepskin coat. When he arrived he met with Mr Iyengar and George Stavrou at King’s Cross Station who had invited him from the North.