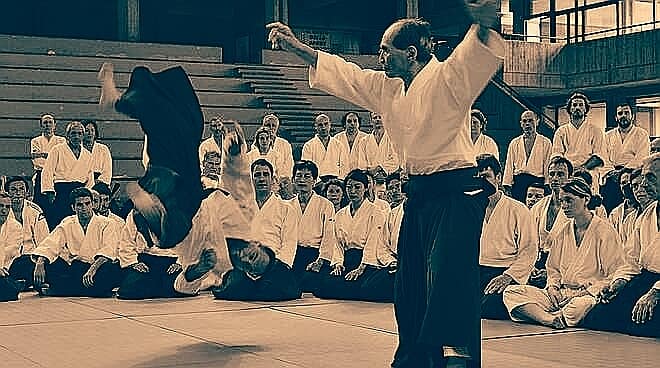 From the age of twenty to the past thirty he used to get up every morning at half past five and run for about fifteen kilometers. Once back home he trained by hitting a bundle with a bokken. At that time the houses of Jiyugaoka – the neighborhood of Tokyo where he lived – were very far from each other so that he could make all the noise he wanted. He trained with the Jigen ryu method, which he had learned in Iwama from master Ueshiba. It is said that in the past the warriors of the Satsuma fiefdom in Kyushu struck a large bundle of shrubs ten thousand times a day; but the master Tada was initially able to give five hundred blows at most and at first his hands went numb, but in a short time he was able to hit a large tree without any problem. At Waseda University and Gokushuin University, Master Tada’s students train in this way, as he finds it to be one of the best training methods for aikido. Of course he points out that it is not correct to use excessive physical force. In fact, you need to hold the bokken or more simply a green wooden stick lightly and squeeze it with your ring finger and little finger at the moment of impact. The speed in carrying the blow and the ability to properly squeeze the fingers develop naturally.

This way of practicing with kindness is important, as with the continuous use of force you can end up projecting or immobilizing the joints of those who attack with too much energy and this can be dangerous. Unfortunately, the limited space of modern practice places no longer allows this type of training, but the intention of the master intends to gradually rearrange things in order to make it more and more accessible. For him, the one just described is one of the fundamental ways to bring the blows; the movements of the feet and hands and the development of ki vital energy through meditation with the kokyu-ho breath are equally important elements of personal training. He also stresses that one must carefully observe one’s master’s personal training method and assimilate it; otherwise hasty and wrong conclusions can be drawn, risking to make a workout without any meaning or even incorrect. In any case, one must always re-examine what the teacher taught, in an attempt to discern what constitutes its foundation; at this point you have to practice it repeatedly until you are able to do it well. This creates your own personal training method. Anyone who wants to become an expert in what he does and will do – a martial art, a sport, any artistic activity or anything else – must train every year for at least two thousand hours, when he is between twenty and forty years old: this means five to six hours a day.