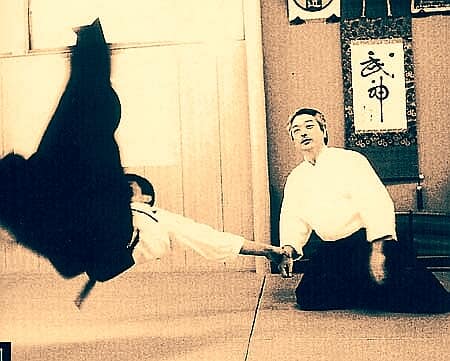 Kobayashi had a cordial relationship with Kenji Tomiki, founder of Shodokan Aikido. On 10 October 1969, Kobayashi invited Tomiki to Osaka, where the latter gave a short course to introduce competitive aikido to students from six local universities. In aikido circles, there was friction regarding competitive aikido because nobody knew Tomiki’s theories or the essence of his aikido. Kobayashi met with Tomiki to try to understand his techniques and his intentions. He suggested that Tomiki show his aikido to the students as the best way for everyone to understand.

One of Tomiki’s instructors, Tetsuro Nariyama, came to Osaka from Kokushikan University and spent six years as uchideshi with Kobayashi. Nariyama taught at the Shodokan Honbu but at the same time he was learning from Kobayashi who was teaching in the universities in that area. He accompanied Kobayashi to lessons and had the chance to introduce the students to randori. Aikido in the style of Kobayashi Hirokazu is taught today in Europe, South America, India, Indonesia, New Zealand, USA and Japan. Due to the activities of Kobayashi Sensei who spent usually up to 5 months every year in Europe several highly ranked Aikidoka, still teach his unique style in Europe.

Kobayashi was a member of the Aikikai Foundation. He never wanted to found an organisation of his own, and asked his pupils not to do so either. His idea was to teach Aikido to everybody who wanted to learn and not to gain personal profit by doing so. A few months before he died in 1998, he gave the permission to his students to found the independent organisation, Académie autonome d’aikido, which attempted to synthesise the uniqueness of his teaching, without asserting superiority over other styles. This led to the formation of Kobayashi aikido.

Kobayashi died in August 1998 after an illness.