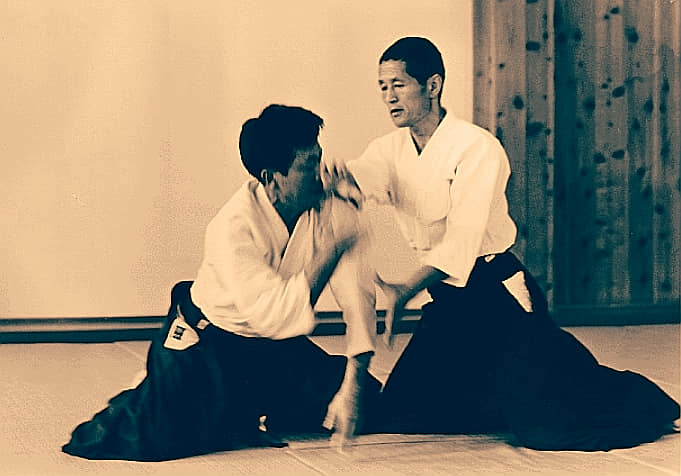 In 1981, he asked Gerard Blaize, his pupil since 1975, to go to Europe. As the students were still few in number, he had to wait until 1984 to make his first trip to the old continent. Master Hikitsuchi renews his coming to Europe every year until 1988 when that year, unfortunately he cannot come. Sick of cancer, Hikitsuchi Sensei must undergo two important surgeries. Following these internships, the French Traditional Aikido Association of Japan (AFATJ) is created to better receive it and ensure the continuity of its teaching.

On May 23, 1985, Michio Hikitsuchi and his American pupil Clint George perform a demonstration in front of the former President of the United States Jimmy Carter and his family, while on an official visit to Japan. On March 17, 1991, Hikitsuchi shihan received at the Nihon Budokan in Tokyo from the hands of Doshu Kisshomaru Ueshiba, a diploma and a decoration for his particular contribution for over fifty years to the teaching and development of Aikido.

In 1992, Hikitsuchi Sensei’s health improved and allowed him to return to Europe. For several years, he directed seminars in France, Spain and Finland.

Maitre Hikitsuchi, accompanied by Gerard Blaize, performs an aikido demonstration at UNESCO headquarters in Paris in 1995.

From 1998, his health deteriorated, it was then impossible for him to return to the old continent. However, he continues to teach in Shingu, assisted by the oldest members of the dojo.

Descended from a family of warriors, he graduated in several martial arts but also in other traditional Japanese arts such as the arrangement of flowers (ikebana), the tea ceremony (sado) and the Japanese lute (koto) including he will obtain the grade of 6th dan.