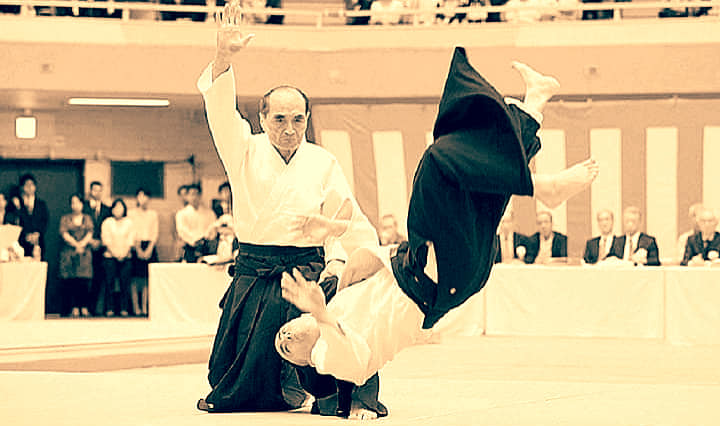 As far as practical training is concerned, it must first be considered that the body is a physical object, therefore the way in which it moves must be rational and scientific. However, martial arts (budo) require training focused not only on how to sit and stand but also on how to mentally influence the body and be most alert. A particular emphasis should be placed on how to move the body, or how to quickly acquire the necessary stability to perform the techniques well. Certainly there are principles that govern all these activities, and that must be fully understood and put into practice during training. The term scientific therefore means that a set of scientific principles is followed and applied.

The role of the teacher is to transmit these principles to the student, but it is difficult to do it through logical explanations; it is better to learn it gradually through your body, even without becoming aware of it. This is why Master Ueshiba never explained his techniques: explanations in words stop in the ears. In fact, simply performing the technique as best you can is the fastest way to improve. It is not good to think that one cannot do something if one has not already experienced it, if it is not already assimilated. During dojo training, predetermined attacks are made, but this does not mean that you are unable to respond to a sudden attack carried out differently. Master Ueshiba, for example, taught that shomenuchi (direct blow to the head) represents the attack in which the opponent’s energy comes directly from the front, and that it could also be carried with a spear, with a sword, with a knife or a kick, so it is not simply a blow to the forehead with the te-gatana (outer edge of the hand). During training you need to keep all these possibilities in mind, focusing your attention on how your body responds to each attack, and how to create lines of force to adapt your body to it. In addition, you need to have a special form of energy in order to create an environment where you can really train and be motivated to train. Motivating everyone in dojo requires the power of the universe’s vital breath (kokyu).

It is said that the master Ueshiba, for example, performing suwariwaza ikkyo, for example, did not leave the opponent with any possibility of attack, that is, he started the movement emanating all his vital energy in the way known as “cultivation of magnetism”, which consists in having an acute conscious perception of the vital breath of the universe, which attracts the attacker like a piece of iron, is instantly attracted to a magnet. Three situations can be considered: the attacker moves first, defender and attacker move simultaneously, the defender moves first. The technique is actually the same anyway and what matters in the end is the maintained mental state. On the other hand, if one looks only at the external form, considering the techniques only as a sort of self-defense, one will never be able to fully understand their global meaning. The techniques draw on vital energy, do not consist in the simple interaction of two material bodies, and the training is like a mirror that reflects the practitioner’s sensitivity towards vital energy. Cleaning the mirror is its most important aspect. There are two types of “entrances” with respect to the opponent’s attack: omote from the front and ura from the rear. From a purely material point of view, an ura technique is performed when the partner has steadily placed his rear foot on the ground by lifting the front. When, on the other hand, the rear foot is moving or when it is not yet well supported, when the vital breath of the practitioner passes freely through the partner, then the technique is performed omote. Such a variation occurred very often in the teaching of master Ueshiba. The important point, however, is that you have to be able to perform the techniques in every direction, over a 360 degree arc. Omote and ura are not predetermined forms or molds; they simply represent the idea that techniques can vary with the utmost freedom.

Master Tada always tries to pass on to his students everything he remembers of Master Ueshiba and what he has learned from him, however, he points out that many stories and many anecdotes actually come “from the top of the mountain” so that there is a risk that they will come misunderstood if the context is not explained. On the other hand, there is an old saying that having too many notions can hinder true knowledge. When he was a disciple of the master Ueshiba he tried with all his energies to absorb and digest his every teaching, trying for years to copy it. In Japan there is an expression, gokui ni kabureru, to describe someone who tries to go beyond their abilities, a way of doing this that has always been despised by the Japanese. Therefore caution should be exercised in telling the young people of the master Ueshiba or in showing them the films that portray him. In fact, the master Ueshiba always reproached severely the one who simply imitated the exteriority of the techniques, with these words: “You must not imitate only the external form of what I do! Focus more on your fundamentals!” The phrase “aiki is love” is also well known. Generally the term love is used in a relative sense, as when one says: “I love this, or that”. But master Ueshiba spoke of love in an absolute sense, such as that of the mind of the Universe. Consequently, while it is easy to understand this love on an intellectual level, if you do not merge with the whole Universe as the master Ueshiba did, you certainly cannot understand how he intended it. Perhaps this was the mental “lucidity” or the “becoming lucid” of which he usually spoke. However, the talks of the master Ueshiba took place at a very high level and sometimes remain of difficult interpretation.

About training to grow and develop ki, it is important to become aware of your physical limitations: it is impossible to lift extraordinarily heavy objects or run in an extremely fast way. When in the mental realm, however, in the early stages it is impossible to know your true limitations and how to develop yourself and reach this limit. There is no other resource than to faithfully follow the wisdom of the past, to train diligently following the methods that are transmitted by the masters.

Source and great thanks to: Facebook/Aikido